Skip to content
November 11th, 2017, is 99 years since WWI Armistice Day (Nov. 11, 1918) (see also post-242). Sometime in the past twelve months I watched the 1930 film All Quiet on the Western Front for the first time. Some years ago I read some of the book but misplaced it before finishing.

U.S. Veterans Day is on the day it is because of Nov. 11th, 1918. Few seem aware of this. This leads me to ask how Americans actually remember the war today.

All wars tend to be remembered differently by those who actually lived through them, or fought in them, than by later generations. This we can attribute to changing political circumstances and/or to concerted ‘lobbying’ efforts to remember a war in a certain way. There are many examples of this.

There is not now and I don’t think ever was much of a ‘lobby’ to remember WWI in the USA in a certain way. The U.S. entered this war towards the end and was only involved in major combat operations for six months in 1918, though its contribution and political commitment was decisive in the German decision to give up in fall 1918. Considering the limited commitment and the return to traditional “isolationism” (the George Washington Doctrine) quickly after the armistice, American memory of the war is inevitably going to be weaker than maybe any of the belligerents’, on whose land battles were fought, whose political systems were shaken and in many cases overturned by the war, and many more of whose men were killed.

A German pacifist and war veteran wrote the All Quiet on the Western Front novel in the late 1920s, inspired by his own experiences (a non-pacifist bestseller of the same era was Storm and Steel by another German veteran, Ernst Junger). All Quiet was immediately a huge international bestseller, a fact that alone tells us what war memory was like ten years after the war’s end. I think these four stills from that film may capture its essence: 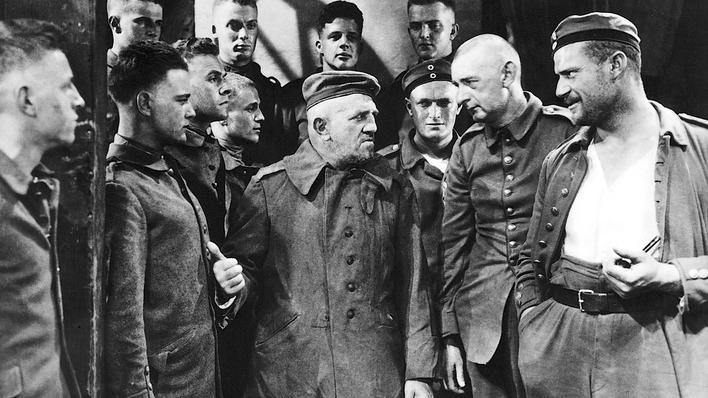 The film follows a group of 18-year-old students (first picture), who are encouraged to enlist by their ultrapatriotic teacher, who is presented by the film as a pompous fool. The boys join enthusiastically. They fall in with Army life and have some good but many bad experiences with characters in the Army on their own side (second picture). They fight, and begin to die (third picture), but for what gain they die (even the temporary tactical gain of a particular battle) is deliberately made completely unclear in the film. They die for nothing. By the end (the fourth picture is the very last scene, a fade-out onto the field of crosses), almost all the major characters have been killed in various ways by an unseen, mechanical enemy. A waste of human life. That is the message of the movie.

This is classic pacifism, and is really not the standard view of war, of the military, in the USA that I have known since the 1990s. Pacifist ideas as such today have been relegated to a political margin, heard sometimes but not really taken seriously. (This is an inevitability given the world political situation since about 1942.)

I understand that pacifism was once very important in U.S. culture/politics, and I don’t mean that brief period around the late 1960s and 1970s that exerts a powerful cultural memory now fifty years later. I mean a much longer time ago. I discovered in my grandfather (b. 1916)’s book collection, several serious pacifist books of the late 1910s and 1920s or so, which he seems to have inherited from his father (born 1886 in Germany; in the USA from 1887) and other relatives. He also had a copy of All Quiet on the Western Front, in English, published in one of its early editions.

So how do non-pacifist Americans, that is, mainstream Americans, remember the disastrous 1914-1918 in Europe? I think most Americans “write it off” as a prelude to the 1939-1945 war; that is, the 1939-1945 mythos swallows up 1914-1918, destroys it, “puppetizes it,” towards the political ends of 1939-1945 which remain with us in the 2010s. Roughly: Imperial Germany in 1914 is the “bad guy,” is a nationalistic-militaristic bully-state that threatens world peace, and — though this is vaguer — somehow maliciously orchestrated the war in summer 1914 through aggressive intent and aggressive action. A surer menace to world peace, unknown. A regime that bore all the “war guilt” for 1914.

These were the ideas churned out of the British or French propaganda ministries, ideas that at the time were widely rejected in the USA ,in which popular opinion was against the war through its first years, ideas which, in the 1920s were essentially all discredited in the vigorous historians’ academic battles over “war guilt” for 1914 (the so-called Kriegsschuldfrage). In other words, this view of Imperial Germany in 1914 is wrong, at least if we trust expert consensus. Imperial Germany, the historians concluded, was not much different from any other regime in Europe at the time and acted in its interests, even if a bit sloppily, just like every other state did.

I note that the U.S.-made film All Quiet on the Western Front, released in April 1930, does not depict the German soldiers as villains at all but generals as the opposite, as sympathetic people, normal people, not unlike “us.”

The problem was not ‘Germany’ or ‘Prussianism’ in any sense which singles out Germans as a people, or Berlin’s Hohenzollern Dynasty, or the military, or anything else; the problem was the lack of a stable international system, and, really, the fact that 20th century Europe still had a 19th century ruling apparatus.

So rather than a morality tale of “this state was a good-guy and that state a bad-guy,” what is forgotten, I think, in the popular mind, is that the real lesson is one of poor statesmanship. It was so during the July 1914 crisis, during the war, and during/after the 1918-1919 peace negotiations. Too few realized that this war had no winners. It had been socially destructive and seriously destabilizing. Perhaps worst of all, it gave birth and sudden energy to the global Communist movement, starting in Russia; one hundred years ago this week, in fact, Nov. 7, 1917, armed Communists took over St. Petersburg, then the Russian capital. Russia was in peace negotiations with Germany within weeks and exited the war soon thereafter, before large numbers of Americans began arriving at the front.

In long retrospect, strong candidates for villainy may be the British and French governments, who angrily demanded their diplomats shove aside hapless President Wilson’s “peace without victory,” demanded Germany be punished, and saw to it that it was. The War Guilt clause demanded reparations. The results were bad for everyone.

Anyway, my impression is that the British, French, and Germans remember the 1914-1918 war, after a century, with a deep sadness, closer to the All Quiet on the Western Front view than anything. It is harder for Americans to do this.