For reasons I don’t know, I began to re-read the classic history of the Thirty Years War by C. V. Wedgwood. In it I was reminded of a political point about that war I had forgotten, and one similar to one the US may be, today, at the cusp of.

The crisis began in 1618 because of an electoral tipping point.

There are fairly direct parallels between the Thirty Years War origin and the US institutions of the electoral college system and the nine-member Supreme Court system (see below) and fears about the ‘flipping’ thereof.

The Holy Roman Empire, a nominal political arrangement encompassing most of central Europe for most of the second millennium AD and ruled (in theory if not practice) by an emperor of the Hapsburg Dynasty for much of that time, had seven “electors” (Kurfürsten). These were seven seats which held the right to cast one vote for emperor when the need arose.

END_OF_DOCUMENT_TOKEN_TO_BE_REPLACED

I took special interest in the centenary of the ceasefire (armistice) that ended the 1914-1918 war.

I have written on these pages before about centenary events around the tragic 1914-1918 war, including twice about Nov. 11th:

Scenes like this (right on desktop version) were repeated across the Western Front on November 11th, 1918, according to reports of those who were there. It seems surreal that the opposing armies immediately put down their guns and began intermingling and celebrating the end of the fratricide at last, in the hours after the ceasefire.

I propose that the above photo is the best possible commemoration of the Armistice, better than any thousand-word write-up anyone could come up with; some pictures, as they say, are worth more. (Though the photograph is not from Armistice Day itself [Nov. 11th] itself, it may as well be; it closely parallels the experience of hundreds of thousands that day.)

The picture symbolizes, at one level, the triumph of humanity and fraternal feeling through/over even the worst of politicians’ blunders. I think it is symbolic, too, of the kind of the European unity and friendship that “could have been” (i.e., there was never any need at all for the 1914-1918 war.)  At once both positive and tragic.

I tried to do my own small commemorations marking the exact 100th ‘hourly’ anniversaries of both the signing of the armistice and its much-more-famous implementation later that day (11 AM Paris time), END_OF_DOCUMENT_TOKEN_TO_BE_REPLACED

Napoleon, following his second capture in 1815, was sent off to one of Earth’s most remote places, Saint Helena.

He would never again leave the island. After years alone there, with hardly even anyone to talk to, he died.

The image of Napoleon alone on Saint Helena, for years, thousands of miles from the continent of which he was nearly undisputed master for most of the 1800-1815 period, is poetically tragic even if one doesn’t like Napoleon.

Are there any lessons from Napoleon for the rest of us? In the imagery of Saint Helena, there are. I would here cite the traditional folk song  “The Isle of Saint Helena” which describes the man island-bound to Saint Helena and contemplating his life every day as he watches the waves.

“He sees his victories,
and how fleeting they all were!”
The point is that things are fleeting. All things. Here is the full song The Isle of Saint Helena (starting at 0:47) and lyrics:

END_OF_DOCUMENT_TOKEN_TO_BE_REPLACED

Austria’s 2017 general election has come and gone, following Germany’s a month ago. The key issue in both elections was the 2015-2016 Migrant Crisis, disgruntlement over which appears to have energized large numbers and shifted the political discourse to the right; turnout was high. In Austria’s case, parties of the right will have over two-thirds of the seats in the new legislature, and that is with proportional representation.

The age of the new Austrian Chancellor has been the main coverage of the election I have seen. It is amazing, actually, that he is so young. The German press has called this character a ‘Young Metternich’ ever since he became Foreign Minister, at age 27, a few years ago. He is now 31.

The original Metternich (1773-1859) is characterized as a political genius who dominated Austrian politics from the 1810s to the 1840s, starting, as Kurz has, as Foreign Minister.

Metternich’s great achievement is the preservation of Austrian power. At that time, Austria was a true power, a major power, but could have disappeared after the Napoleonic disruption. Metternich gave the Austrian Empire another century of life, for better of worse. The Austria of that era was a multi-national, pan-central-European empire with a German ruling minority and a long-established royal family (the Hapsburgs). It era represented a Catholic, multi-ethnic, ‘multicultural’ alternative model to north-German Protestant ‘Prussianism’ based in Berlin.

(Having long since lost the struggle against Berlin, Austrian/Hapsburg power ended forever in 1918, after the loss of legitimacy caused by its poor performance in the war and an embarrassing-and-obvious dependence on Germany from summer 1914 onward (actually earlier). With Vienna discredited and totally unable to suppress ethnic secession movements, the pan-central-European ‘Austria’ fell apart and this new German-Austria, as we know it today, was born.)

The ‘Young Metternich’ appellation for Kurz doesn’t make much sense, to me. The Austria of today is, unlike its imperial predecessor namesake, a very small state (7.5 million citizens in a Europe of 750 million). Also critically for this comparison, modern Austria is, by tradition, not a player in international politics. It is not now and never has been a NATO member, and, for a Western country, was quite a late entrant into the EU (1995, about forty years late).

Kurz and Metternich might be compared in broader terms. Metternich is credited not just with preserving/restoring Austrian power after the Napoleonic crisis, but with being a/the central figure in doing the same for the whole of Europe’s quasi-aristocratic order which was seriously threatened, discredited, and injured during Napoleonic period. A lot of ‘centrists’ around today’s Europe dream of a figure to play this role of defending the European post-1945 order of social-democractic liberal democracy in a time it is (widely believed to be) “under threat.

Skeptics would say that Kurz is not such a figure, even discounting the small size and disengagement of Austria, as he led his party to a 7.5% popular vote gain using, many have said, a watered-down version of the rhetoric of the insurgent Austrian Freedom Party (FPO). The latter is a party of the populist-nationalist right, whose campaign was based on slogans like “Stop the Islamization of Austria.” 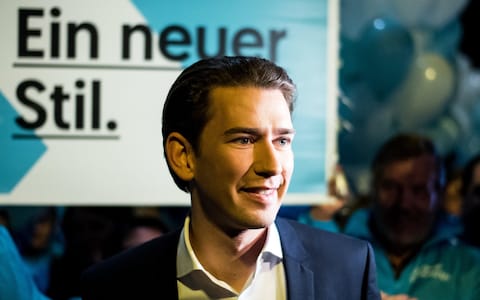 Who will be Kurz’s coalition partner?

He can form a ‘coalition of the Center’ with the Social Democrats (SPO), or he can rule in a right-wing coalition with the FPO. If the latter coalition governs, Austria will seem to have entered the ‘Viktor Orban’ Wing of European politics.