No doubt many are unaware of the Lee–Jackson Day holiday. The two sons of Virginia, Robert E. Lee and Thomas “Stonewall” Jackson, have birthdays about this time (Jan. 19 and Jan. 21, respectively), a coincidence which gave rise, a long time ago, to the holiday in Virginia. It remains in effect today, even if backed by no enormous media machine.

It is a great piece of art in that it is an effective portrait of the general, his men, and the campaigning that brought fame and renown to both.

The song “Stonewall Jackson’s Way” was originally written in 1862 and appearing in poem form but also quickly becoming a hit song. The song’s composer was unknown for years. Testament to how alluring was the legend of Stonewall Jackson, by 1862, is the fact that an northern admirer had actually written the poem/song, a fact only finally revealed in the 1880s.

The version recorded by Bobby Horton in the 1980s is good (below); Horton rightly deserves his fame as a Civil War music interpreter/popularizer.

“Stonewall Jackson’s Way” Lyrics, as sung by Bobby Horton (below, a few more comments below on the figure of Jackson, and on my feelings on Lee–Jackson Day):

END_OF_DOCUMENT_TOKEN_TO_BE_REPLACED
Napoleon, following his second capture in 1815, was sent off to one of Earth’s most remote places, Saint Helena.

He would never again leave the island. After years alone there, with hardly even anyone to talk to, he died.

The image of Napoleon alone on Saint Helena, for years, thousands of miles from the continent of which he was nearly undisputed master for most of the 1800-1815 period, is poetically tragic even if one doesn’t like Napoleon.

Are there any lessons from Napoleon for the rest of us? In the imagery of Saint Helena, there are. I would here cite the traditional folk song  “The Isle of Saint Helena” which describes the man island-bound to Saint Helena and contemplating his life every day as he watches the waves.

“He sees his victories,
and how fleeting they all were!”
The point is that things are fleeting. All things. Here is the full song The Isle of Saint Helena (starting at 0:47) and lyrics:

END_OF_DOCUMENT_TOKEN_TO_BE_REPLACED

(Expanded from a draft from mid-August 2015. I was reading about Fiji at the time before I was to spend twelve hours in that mysterious, tropical island-country as part of one of my returns-to-the-USA in late August 2015. I was coming from Brisbane, Australia, visiting my cousin, Mel. W. The long layover in Fiji was also the cheapest option. From my perspective fortuitous as it would give me a foray into Fiji on the cheap.

In the weeks before I was to briefly spend time in Fiji in August 2015, I looked around for material. One thing I found to be so amazing as to be worth recording here. It is something published in March 1859, which concludes with a series of futurist predictions about Fiji and the world. Reading these predictions from 1859, I am amazed.

The predictions have (nearly) all come true: 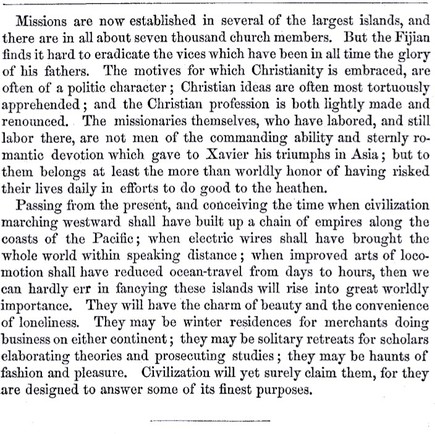 (Final two paragraphs of an anonymous, ten-page book review appearing in The Knickerbocker [March 1859 issue] . The reviewed book is the 1858 Fiji and the Fijians by Thomas Williams and James Calvert (ed. George Stringer Rowe). The Knickerbocker was a New York literary magazine with an 1833-1865 publication run. It was similar in style, and likely a partial antecedent to and/or inspirtation for, The Atlantic [first issue published in 1857]). The entire March 1859 edition of the Knickerbocker is online here.)

First, my own brief experience in Fiji, then an attempt to evaluate the Knickerbocker writer’s predictions with the distance of 159 years of time elapsed since publication. Summary: Very accurate.

Fiji is not like any place I have been, before or since.

I formally entered the country and have the passport stamp to prove it, which means I am counted as one of the END_OF_DOCUMENT_TOKEN_TO_BE_REPLACED

“Speedy Gonzales” is a song I heard for the first time fifty-two years after it was released. I heard it on satellite radio in my uncle’s car in Connecticut, August 2014. It is based on the old cartoon of the same name.It is a lively and fun song. It would also never, ever, be allowed by today’s “gatekeepers of acceptable discourse” in the USA. No way would a major pop singer be allowed to release anything like this today. There are still plenty of acceptable cultural targets of mockery, but this one would today be verboten.
Lyrics below:

.
Read More
Speedy Gonzales (1962) By Pat Boone
It was a moonlit night in old Mexico
I walked alone, between some old adobe haciendas.
Suddenly, I heard the plaintive cry of a young Mexican girl….

You better come home, Speedy Gonzales
Away from Tannery Row
Stop all of your drinkin’
With that floozie named Flo

Hey, Rosito, I hafta go shopping downtown for my “mudder”
She needs some tortillas and chili “paypers”

I saw some lipstick on your sweatshirt
I smelled some perfume in your ear
Well, if you’re gonna keep on messin’
Don’t bring your business back-a-here