Losing a pair of gloves I felt particular attached to, I decided I’d be willing to retrace my steps around town. Chances were fair that I could find the missing gloves, as I had in similar cases before. I was committed. I figured the had fallen out of my pocket while I was cruising along on the bicycle.

But unexpected good thing have a way of showing up, springing from the bad. I decided to make the best of this perhaps-several-hours-long commitment to carefully and slowly retrace all my steps by listening to a podcast along the way, so as “not to waste the time.” This is how I justified the search to myself. I am not in the habit of listening to earphones in public these days, so this was a conscious decision.

I googled around for a podcast that would make my time worth it. Something new. I came to the BBC podcasts page. The top one I saw was called “End of Days.” I said, Okay, yes, this’ll do. I don’t even have a good working pair of earphones anymore. I have a few freebies from airlines. Only one earphone worked.

Gone forever though the gloves may be, those gloves did give me a final gift, one arguably even better than hand warmth, as without losing them, I’d never have come to hear this really excellent “BBC Five Live” podcast. It’s less about the 1993 Waco incident, more about the personalities involved, a retrospective after 25 years. About 4.5 to 5.0 hours of total listening time; eight episodes. Some impressions and reactions follow in this post. First personal re:Waco, then a long review of the podcast’s contents, then a brief final thought on cults as I encountered them in my years in Korea.

END_OF_DOCUMENT_TOKEN_TO_BE_REPLACED

It suddenly occurred to me that the endless US interventions in the Middle East familiar to us today really date to August 1990, and have, since that month and the fateful decision made in it, followed on a path set down at that time. August 1990 was the month George H.W. Bush and his foreign policy people decided on the intervention against Iraq in its local war against Kuwait. In other words, there is a traceable ‘genealogy’ of US Middle East interventions that start with the August 1990.

This idea occurred to me suddenly while reading a book called The Back Channel, by William J. Burns, published in March 2019 and recently given to me by my friend Aaron S. The author, Burns, is one of the most significant US State Department figures of the 1990s–2010s whom you’ve never heard of. The chances are fair that he could be sworn in as Secretary of State in Jan. 2021, if a Democrat wins.

END_OF_DOCUMENT_TOKEN_TO_BE_REPLACED

Nov. 2019: I passed through California for about five days.

(Observations about Southern California with pictures, and some springboarding off of them.)

Places I spent at least some time were: Van Nuys; the Santa Ana River trail in Orange County; Anaheim and “Anaheim Hills;” Orange (the city of); Santa Barbara. On a previous visit (late Aug. 2018), I went to Huntington Beach.

Friday early morning. I arrive at the airport from points east (Korea, by way of a long layover in Hawaii) and am soon on the bus to LA Union Station. Or am I? I am not. I got on the wrong bus. It was not labeled. It came to the place marked LA Union Station; I decide to take this new opportunity. and follow the shuttle bus where it goes. New destination: Van Nuys.

END_OF_DOCUMENT_TOKEN_TO_BE_REPLACED

No doubt many are unaware of the Lee–Jackson Day holiday. The two sons of Virginia, Robert E. Lee and Thomas “Stonewall” Jackson, have birthdays about this time (Jan. 19 and Jan. 21, respectively), a coincidence which gave rise, a long time ago, to the holiday in Virginia. It remains in effect today, even if backed by no enormous media machine.

It is a great piece of art in that it is an effective portrait of the general, his men, and the campaigning that brought fame and renown to both.

The song “Stonewall Jackson’s Way” was originally written in 1862 and appearing in poem form but also quickly becoming a hit song. The song’s composer was unknown for years. Testament to how alluring was the legend of Stonewall Jackson, by 1862, is the fact that an northern admirer had actually written the poem/song, a fact only finally revealed in the 1880s.

The version recorded by Bobby Horton in the 1980s is good (below); Horton rightly deserves his fame as a Civil War music interpreter/popularizer.

“Stonewall Jackson’s Way” Lyrics, as sung by Bobby Horton (below, a few more comments below on the figure of Jackson, and on my feelings on Lee–Jackson Day):

END_OF_DOCUMENT_TOKEN_TO_BE_REPLACED

I somehow ended up seeing the 1960 Twilight Zone episode, “People Are Alike All Over.”

Sometimes (always?) Twilight Zone episodes have some kind of moral lesson embedded in them. I would propose this one’s was:

END_OF_DOCUMENT_TOKEN_TO_BE_REPLACED

It looks like the inner circle of Washington power-players, who imagine themselves Great Game players in the Middle East, have either failed to make a New Decade’s Resolution to get off the intervention-addiction, or, if they did make such a resolution, have spectacularly failed to keep it for more than three days.

Killing a foreign general in peacetime. Not a good look.

The Iraq War of the 2000s, which drifted along for years after the March 2003 invasion (at enormous cost and with second-order effects generally recognized to be bad) was the most egregious case, but many others, large and small, fall into the same general category.

I have been against these interventions since 2002 while still a mid-teenager. What benefit they are to us, I do not see.

For reasons I don’t know, I began to re-read the classic history of the Thirty Years War by C. V. Wedgwood. In it I was reminded of a political point about that war I had forgotten, and one similar to one the US may be, today, at the cusp of.

The crisis began in 1618 because of an electoral tipping point.

There are fairly direct parallels between the Thirty Years War origin and the US institutions of the electoral college system and the nine-member Supreme Court system (see below) and fears about the ‘flipping’ thereof.

The Holy Roman Empire, a nominal political arrangement encompassing most of central Europe for most of the second millennium AD and ruled (in theory if not practice) by an emperor of the Hapsburg Dynasty for much of that time, had seven “electors” (Kurfürsten). These were seven seats which held the right to cast one vote for emperor when the need arose.

END_OF_DOCUMENT_TOKEN_TO_BE_REPLACED

What is a think tank? Many ask.

I might be able to record some kind of useful insight into the “what a think tank is” question, based on my own experiences this year and by what I know of a few other think tanks I have been able to observe at close quarters in the past few years (sometimes doing some sort of work for them, sometimes just as an observer).

The think tank hired me to do research on Asia; to help with various of their publications and projects, some new and some ongoing, especially Korea-related.

It was a small think tank, not without its problems. I was the most Korea-knowledgeable person there. I was a regular employee, but those of us at low levels were under a contract for a certain period of time.

The above sounds good, I expect. On the negative side, most think tanks are quasi-academic and therefore remain always at risk of falling into the same kind of “jealous guarding of little fiefdoms” problem so often observed in academia. Needless to say, this can sometimes create a negative environment.

Another useful way to conceive of this negative side may be: The think tank as a “team version” of graduate school. For many, graduate school itself is, at least intellectually speaking, an intensely personal experience in which you usually have full creative control over your own work, and in which collaboration, to the extent it meaningfully occurs, is voluntary and limited. I would imagine it would be unbearable, for many people who end up in graduate school, if every assignment they did were decided by committee, with the “committee” being several other, let’s say randomly selected, graduate-student-personalities.

Another complication is the competing ‘layers’ of authority:

END_OF_DOCUMENT_TOKEN_TO_BE_REPLACED
It is still November 2018 as I write, the centenary month of the end of World War I.

In 2014, I wrote a brief post saying that one of my great-grandfather’s had a “piece” of that war; in fact, all of them had at least some piece of the era, as young men in the 1910s. Specifically and concretely, each of my four great-grandfathers had to register for the draft (conscription) in 1917-1918.

I have located all four their draft registration cards and will post the originals and transcribe them in four posts to follow (1, 2, 3, 4), followed by comments/thoughts on each of their individual cases and circumstances in 1917, and some informed conjecture on what they may have thought of the war.

In May 1917, the USA was on the way to raising a multi-million-man army which was to reach a size of 4.35 million when all was said and done, up from a meager peacetime strength of one-hundred-some thousand (1916).

In another sign of lukewarm enthusiasm for the war, only 75,000 U.S. men had volunteered in the month after Congress voted to approve President Wilson’s declaration of war (April 6, 1917), and so in May the government began to plan for a then-unprecedented national registration system for all young-adult men, and a tiered system of eligibility for conscription (based on “exemptions”). All young men had to appear in person before draft boards of their city or county on appointed days to register, under threat of prison for no-shows:

END_OF_DOCUMENT_TOKEN_TO_BE_REPLACED

A June 1930 printing, English translation (“All Quiet on the Western Front”) was among my grandfather’s books, and it is the rediscovery of it that is inspiration for this post.

Aged a not quite ninety years, here is the book as it appears today: 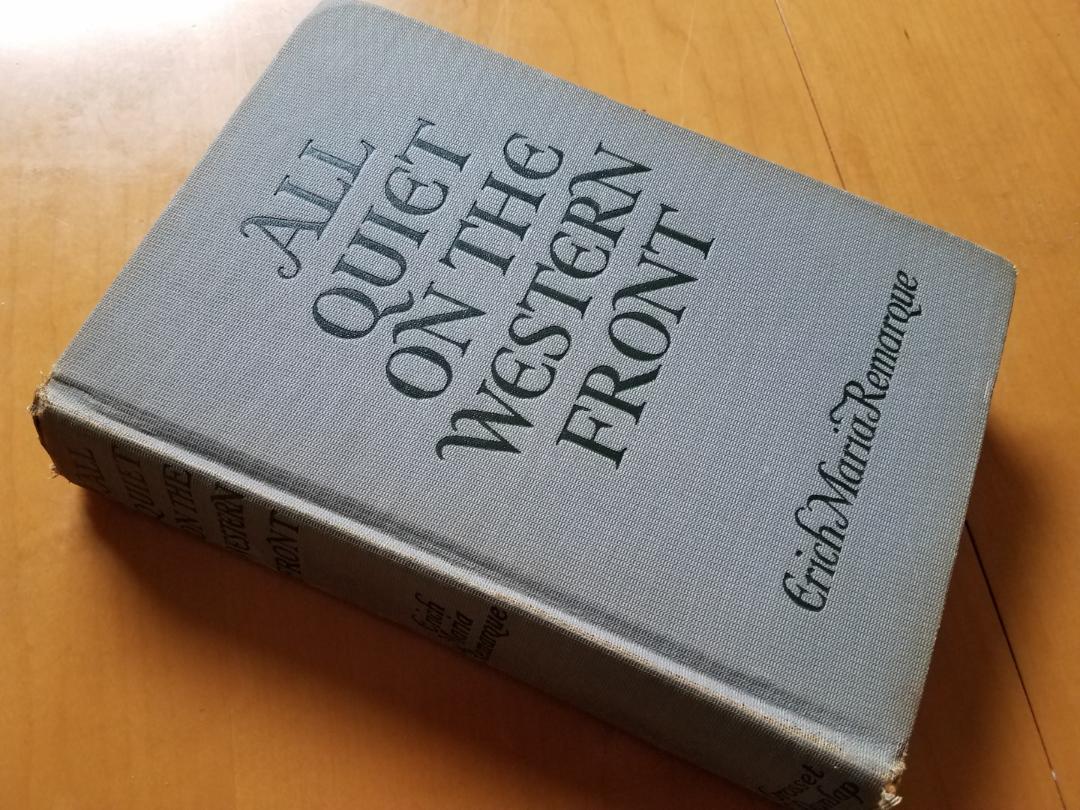 My grandfather died in the late 1990s but his books and other papers and files remained intact until the 2010s (as my aunt continued to reside in the house) at which time I was able to discover many of them, preserved as they were twenty years or so before, some from decades earlier still.

The oldest few books in the house I believe belonged to my grandfather’s grandfather [1857-1917], which I base on years of publication, subject matter, language, and especially the font used (a few of the oldest volumes use that awful font called Fraktur). Some of the books were those my grandfather bought himself. Others somehow ended up, this way or that way, over the decades, at the house (which my grandfather, his wife, daughters, and other relatives lived in from the 1940s through the 1990s), as in those from relatives. This copy of All Quiet on the Western Front is one of those. It originally belonged to George Kosswig, my grandfather’s brother.

Now, I think this is a great discovery not because it is a rare book (which it is not; it would be easy to find for free in any library, and probably without difficulty online for free somewhere in PDF form, in a pinch, if you really want the text). It is rather, I would say, an example of a “time capsule” in book form.

This book-as-time-capsule idea came to me suddenly to me from the inner cover of this copy of All Quiet: END_OF_DOCUMENT_TOKEN_TO_BE_REPLACED